Rich people have a problem. No, it’s not lukewarm champagne or confrontation by stories of poor people in the news. How do they get their zillion-dollar yacht to the next sun-drenched destination location when they are tired of getting their feet wet? Thoughts and prayers, people.

I actually know a guy who sails people’syachts from one side of the world to the next. But a Swiss company might just be putting him out of a job. The company is called AirYacht. And it heard the cry of the wealthy.

AirYacht is creating a hybrid vehicle that combines aviation and sailing, with a dwelling that can be dropped on land anywhere for a visit.

The AirYacht is part blimp and part dwelling — like a floating luxury hotel that you can fly and sail. 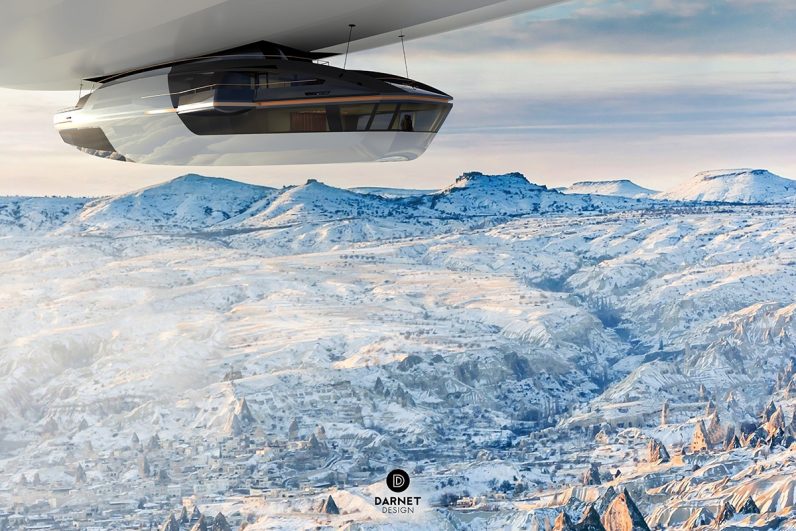 How does the AirYacht travel?

The aircraft component flies courtesy of a detachable airship or blimp powered by an air and helium propulsion system. The long-term goal is to run on only hydrogen in the future.

When on the water, the yacht runs on an electric engine. The airship can also pull it along, so you aren’t delayed for your next party.

The yacht encompasses a three-story residence that accommodates 12 people, and includes 750 square meters of indoor space, including a gym, a sauna, and a swimming pool. Just in case you wanna drop down in the desert and are getting a bit hot.

It’s the brainchild of industrial engineer (and holder of over 40 patents) Matthieu Ozanne, and project manager/consultant Guillaume Hodde, with the architecture designed by Darnet Designs. The company describes its vision thus:

Innovation and technology are omnipresent in the AirYacht project. Greedy for varied and complementary skills, the desire to move forward with the best is inalienable.

I think we can all agree that the term greedy is apt.

Luxury travel has risen in popularity over the last few years, from private planes with a disco and a bar, to private villas. I can’t help thinking this is in part a desire for rich people to separate themselves from the potential unwashed as far as possible.

And in terms of vision, this is actually the second flying yacht released this year. In February, Lazzarini Studio revealed designs for their second flying yacht, with a design that wouldn’t look out of place in a sci-fi movie imagining the future.

But it exists in concept only, whereas orders are open for the AirYacht. The first delivery is planned for the end of 2026. Bet the crypto kids are crying that they won’t be able to afford a ride anytime soon.